Notes to the Marker Key

Postscriptum: as of dec 2007 several scores have been changed by the laboratories, as follows:

On 24 Feb 2002 at my home in Amsterdam I swabbed the inside of my mouth with a cotton stick provided by the Laboratory of Relative Genetics. I sent the sample in to them on the following day. This report presents my Paternal Ancestry Signature as revealed by analysing 26 (later, 43) different locations on my Y-chromosome. The fascinating aspect of the Paternal Ancestry Signature is that it does not uniquely identify me as a single individual, but uniquely identifies my paternal line back through history that extends beyond written records, as the Y-chromosome is passed down intact from father to son through many generations. The Paternal Ancestry Signature is made up of 26 (later, 43) different data points (called loci or markers) that are analysed for the number of repeats at the location. These repeats are known as STR’s (Short Tandem Repeats). (Some markers have multiple alleles. Thus, 385a and b are actually one marker with two alleles, as are 459a & b; 464a, b, c & d; and YCAII a & b.)

On 21 February 2013 I ordered the FTDNA Family Finder Autosomal DNA test: the results were ready in May 2013. This test analyses all 23 chromosomes for genetic matches across the whole spectrum of ancestral lineages. Later on in 2013 four of my maternal brothers also did both the Autosomal and Y-Chromosome tests offered by FTDNA. We all have many genetic ‘cousin’ matches of various degrees. A few matches have been proven by the genealogical records to be 3rd and 4th Cousins on our mother’s side, the exact relationship as genetically determined by Family Tree Family Finder. By comparing my matches with those of my brothers, I can tell which ones are most likely maternal and which are paternal, the paternal matches being those which the other brothers do not have in common with me. On 12 December 2013 I also ordered the mtFullSequence test (Direct Maternal Line, the maternal quasi-equivalent of the Y-Chromosome Direct Paternal Ancestry Line). On 30 January 2014 I received the results: my mtDNA haplogroup is U5b2b3a. The origin of U5b2 dates to about 20 000 years ago. Members of the U5b2 lineage were amongst the first people to repopulate Europe after the Ice Age. However, Neolithic farmers and herders from West Asia crowded out the U5b2 lineage as they entered Europe. U5b2 is now about 2 percent of the population in Europe, being found most often in northern Europe, including England, Scotland, Wales, Ireland, Germany, Norway, Sweden, Denmark and Russia. In May 2014 FTDNA introduced ‘My Origins’, and determined, through precise dna analysis, that I am genetically 100 percent Western European: British Islands – 35 %; Western & Central Europe (Germany, Netherlands, France) – 33%; Scandinavia – 32%.  In 2017 the percentages were slightly changed (see Image):

In September 2014 I ordered and did the 23andMe saliva test for genetic analysis. I received the preliminary results within a few days! 23andMe determined my maternal haplogroup to be U5b2b (the same haplogroup assigned me by FTDNA), and my paternal haplogroup to be R1b1b2a1a2d* (U-152) (N.B. - the FTDNA nomenclature is somewhat different). In addition, 23andMe determined that I am 2,7 percent Neanderthal, which is precisely the European average. En fin, 23andMe has determined that I am 99,99% European, even more precisely, 97,8% Northern European. On 30 Jan 2016 my FTDNA Y-DNA Markers were upgraded from 37 to 67, as reported hereunder:

In February 2016 I ordered the AncestryDNA saliva test kit for autosomal DNA testing. AncestryDNA has determined that I am over 99 percent European, to wit: Western Continental Europe – 67%, Ireland – 14%, Scandinavia – 12% (updated in 2018 to 100% European, to wit: England & Northestern Europe – 93%, Norway – 3%, Germanic Europe – 2%, Sweden – 2%). As of June 2016, at AncestryDNA I already had ninety genetically and genealogically confirmed maternal cousin matches of various degrees from First Cousin to Ninth Cousin. I also had two paternal 2nd Cousins 1R, several paternal 3rd Cousin, and several paternal 4th Cousin DNA matches. Through DNA matching and genetic genealogy I was able to determine and confirm the identity of my father’s parents, his four grandparents, his eight great-grandparents, and six of his great-great-grandparents; I was also able to narrow down the identity of my father to one of two brothers – H. & D. -  both sons of Frank Casimir Jung. A 3rd Cousin DNA match at AncestryDNA graciously put me into contact with the grandson of H., the elder son of Frank Jung. Not only did he share with me photographs and information on my paternal family of origin, but he also offered to the AncestryDNA test. On Easter Sunday (17 April) 2017 his DNA test results became known: he and I share 312 centiMorgans across 19 DNA segments. He proved to be my closest paternal match yet, my First Cousin Once Removed, thus confirming that his granduncle D. Jung, the younger of the two sons of Frank Jung, is my father. DNA matching combined with family tree analysis is a powerful tool indeed! And today I feel like very blessed indeed to have been so helped by it. Moreover, in 2017, by using the same combined method of DNA matching and family tree analysis, I was able to find out who the fathers were of four of my maternal brothers.

In the summer of 2017, J. B. Young, a paternal Third Cousin of mine, a direct male descendant of Casimir Jung in the surname line, as am I, whose relationship to me had already been proven by Autosomal DNA testing at AncestryDNA, agreed to do the FTDNA Y-Chromosome Test. On 28 September 2017 the results became known: his 37 markers matched my 37 markers perfectly, at a distance of 0, thereby confirming our direct paternal surname line. Thus, the Y-Chromosome Test affirms that both of us should bear the same surname ‘’Jung’’: he, in fact, does bear the ‘’Jung’’ surname in its anglicised form: ‘’Young’’; myself, on the other hand, though I bear a different legal surname through adoption, use with pride, whenever I can, the surname that is mine by birthright, and mine by scientific proof: ‘’Jung’’.

Using the Results of the Y Chromosome Matches

The raw numbers begin to take on genealogical significance when the results are compared with other people and population studies. My full Paternal Ancestry Signature is like a family fingerprint that identifies my paternal male relatives, i.e., who share a common forefather with me on the direct paternal line (my father’s father’s father’s father, for example). All other ancestors play no part whatsoever in passing down the Y-chromosome, thus these test results say absolutely nothing about them. Hopefully these test results will be compared to the test results of many others. A perfect match of my Y-chromosome’s markers with the markers of another’s Y-chromosome will prove that we are related to each other in direct descent from a common male ancestor on our father’s side within eight generations counting from my generation backwards in time, and that we should share the same surname (keeping in mind, however, that non-paternal events would influence the surname). One value off on one marker (a mutation) would still indicate blood relationship and descent from a common forefather, but more likely at eight or more generations back in time. (The number of generations is not definite, but based on probabilities, as it is still not known precisely how often or seldom in time a mutation takes place). In Europe there are three main Haplogroups: HG1, HG2, HG3. A haplogroup is a collection of closely related haploid cell genotypes (haplotypes). As science progresses, so does our knowledge of these haplogroups: thus their names and descriptions are ever-changing. 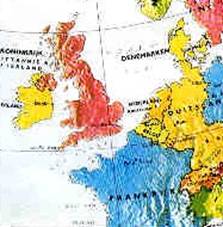 Percentage of Haplogroup R-M269‘s presence in Europe by region

For further information on the subject of genetic genealogy:

And for possible DNA matches see this on-line Y-chromosome database: